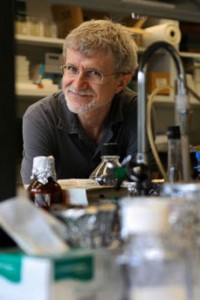 We are interested in ribosome function during protein translation. GCN codons are over-represented in the initial codons of protein Open Reading Frames (ORFs). This GCN periodicity is particularly pronounced in genes with high protein expression. We speculate that the GCN periodicity may reflect mRNA-ribosome interactions that occur when the mRNA is threaded through the ribosome during translocation. We are exploring this hypothesis using a combination of molecular genetics and Molecular Dynamics computational approaches.

Using a subsystem of the ribosome, including the neighborhood of the decoding center where the A-site mRNA codon base pairs with the tRNA anticodon, we have discovered an interaction surface that hydrogen-bonds to the +1 codon next in line to enter the A site. At the beginning of translocation, the interaction surface is positioned immediately adjacent to the tRNA anticodon, aligning it with the +1 codon in the mRNA. The interaction surface consists of the edges of two stacked rRNA bases—the Watson-Crick edge of 16S/18S C1054 and the Hoogsteen edge of A1196 (E. coli 16S rRNA numbering)—and the guanidinium group of R146 of yeast ribosomal protein Rps3 which pi-stacks with A1196. This C1054-A1196-R146 (CAR) surface H-bonds to the first two nucleotides of the +1 codon 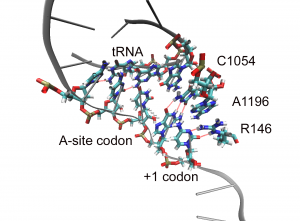 and this interaction is particularly strong when the codon is GCN. We are currently exploring the sequence dependence of this mRNA-CAR interaction which potentially contributes to GCN-mediated regulation of protein translation..

We have undergraduate and graduate research opportunities in our Biology Department and Molecular Biophysics Program.